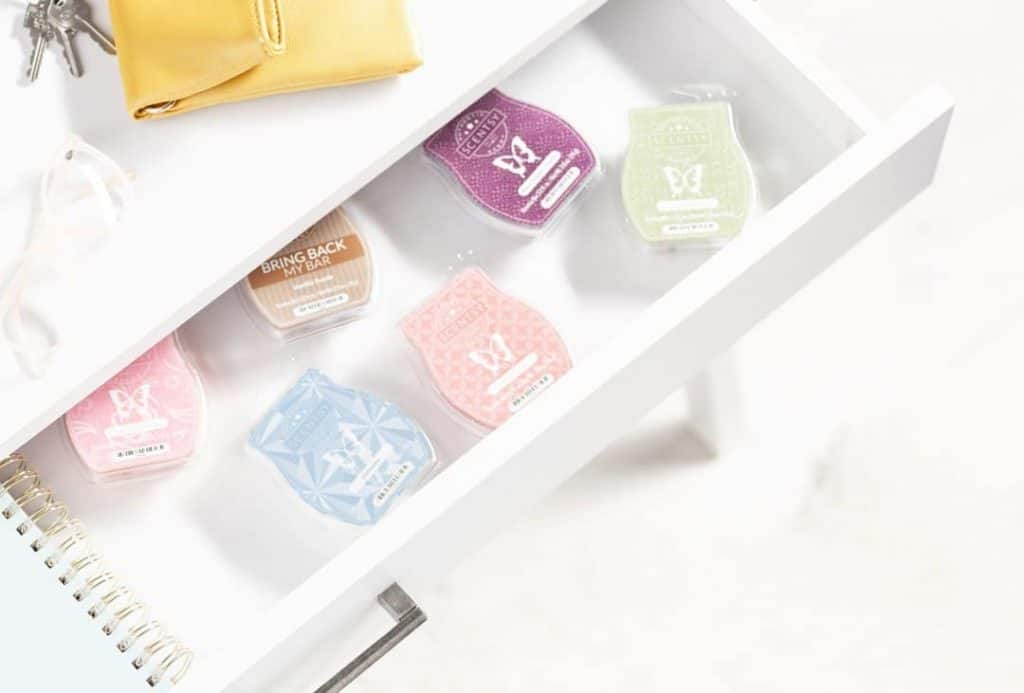 Scentsy UK Wax Bars are the perfect replacement to the flamed candles in your home. We want you to enjoy fragrance safely. Your Scentsy Wax Bars contain 8 cubes of highly fragranced wax, when warmed in a Scentsy Warmer will contain no smoke, no soot, no toxins.

All Scentsy UK Wax Bars can be bought in our Bundle & Save section.

If you wish to add to our weekly bulk order please email us your order for payment via bank transfer or paypal.

What is Scentsy UK Wax made from?

Scentsy Wax Bars are made from a food grade paraffin wax. This wax is similar to the wax used to polish fruits.

How long does a cube and/or a bar last?

There are many factors to consider, like a scent’s ingredients, the customer’s preferred fragrance intensity and the environment where customers warm their favourite bar. Everything — from room size to humidity and temperature, and even the type of flooring — plays a role in fragrance strength and longevity. Since there are so many variables, it’s impossible to provide an accurate time range. You’ll hear 40-100 hours and everything in between from other Consultants, but it truly depends on preference. Noses and environments differ, so as long as your nose (and those of your customers!) is happy, there isn’t a “wrong” answer. Share that fragrance longevity depends on the fragrance experience customers want, rather than a specific measure of time.

How many cubes of wax should go in each warmer?

As mentioned above, there are many factors that affect how fragrance is experienced. Customers should feel free to enjoy as much or as little as their personal preference requires — as long as they don’t overfill the dish!

At what temperature does the wax melt?

This depends on the wattage of bulb and if it’s an element warmer; the range of heat is 54-77 degrees Celsius. Safety is a priority; follow the instructions included with the products.

My favourite fragrance isn’t as strong as it used to be. Why can’t I smell it anymore?e

In the fragrance industry, we use the term “anosmia” to describe losing the ability to detect a certain scent due to lengthy overexposure. Think of the sweetest little grandma you’ve ever seen, completely drowning in her favourite perfume. She wears too much because her nose can’t detect it anymore! The same is true of customers’ favourite fragrances. The more they warm them, the more used to them they become. Another term we use is “olfactive fatigue,” which is the temporary, normal inability to distinguish a particular smell after a prolonged exposure to it. To cure olfactive fatigue, customers should remove the fragrance for a short period of time, and their ability to smell it will return. Here’s an example of olfactive fatigue: Your garbage is stinking up the house. After a while, though, it doesn’t smell so bad so you forget to take it out before you leave for work. When you come home, the stench hits you like a brick wall. Olfactive fatigue = no big deal. It’s normal, and it happens to us all from time to time. Anosmia can be more permanent, but it doesn’t have to last forever. Suggest that your customers remove whatever fragrance they can’t seem to smell anymore from their warmer rotation for a few months and avoid any other fragrances that feature common notes. Recommend customers change it up with something on the opposite side of the fragrance wheel or have them put a different scent in each room so they experience a variety of fragrances as they move throughout the house.

Can I use Scentsy wax in another company’s warmer?

We don’t recommend it, because we design our bars to have a low melting point and only use lowwatt bulbs or heating elements in our warmers. For questions about our warranty, contact Consultant Support.

Are the fragrance ingredients we use in our products safe?

Yes! We want you to enjoy our fragrances with total confidence, so we consistently adhere to all local and international regulations. This includes guidelines established by the International Fragrance Association and the Research Institute for Fragrance Materials, which evaluate fragrance ingredients and set standards for fragrance development. For more information about these organisations and their published guidelines, visit their websites at https://ifrafragrance.org and https://www.rifm.org.

Where can I view the fragrance ingredients in a Scentsy Bar?

We are working to provide ingredients for all our Scentsy Bars (and other relevant fragrance products) on your Personal Website (PWS) in the coming months, but for now, this feature is only available for select products. In the meantime, to get an idea of the basic composition of our Scentsy Bars, type “Black Raspberry Vanilla Scentsy Bar” into the search field , click on the Black Raspberry Vanilla Scentsy Bar from the resulting options, then select the “fragrance ingredients” drop-down box beneath the fragrance description on the product page.

Where can I find more information about the individual fragrance ingredients?

Learn more about the specific fragrance ingredients in your favorite Scentsy products, along with the basics of fragrance safety, at https://fragranceconservatory.com.

Yes. Everything from the water we drink to the air we breathe is made up of chemical components. They are nature’s building blocks. It’s the concentration that matters. Scentsy fragrance products are specially formulated and tested to comply with all federal Environmental Protection Agency regulations, the International Fragrance Association’s Code of Practice, the European Union’s REACH requirements and the California Air Resources Board regulations, all of which restrict the use of fragrance ingredients that pose a risk to consumer health or the environment. We also require the fragrance houses we work with to be active members of the International Fragrance Association (IFRA). The IFRA determines which ingredients are safe and at what levels, by product.

What kind of fragrance oils are used?

We use a combination of natural and synthetic ingredients. All-natural ingredients often come with a higher price tag — that’s why pure essential oils are more expensive and vary widely by oil type. To maintain a steady price point for Scentsy Bars and our other core fragrance products, we incorporate synthetics. Our formulas are thoughtfully designed to provide a long-lasting, optimal fragrance experience.

Why doesn’t Scentsy use only natural oils?

Not every fragrance can or should be created with natural ingredients! (Have you ever tried to harvest fresh air?) Scentsy uses safe, synthetic ingredients to ensure the character of the fragrance remains consistent over time, and to help eliminate sustainability and environmental concerns. For example, musk comes from musk deer, which are endangered. And the quality of crops like rose, lavender or citrus can vary based on factors like precipitation and temperature.

Why aren’t Scentsy UK Wax bars made from soy?

Scentsy Bars are made with a custom, high-quality paraffin wax blend because of its ability to hold the most fragrance oil. It also has a low melting point, which means it doesn’t take much heat to release its fragrance, and it remains firm when not exposed to heat.

This varies by product lines, and even down to the specific fragrance offered. Scentsy Oils are cruelty free and vegan, and all Body and Pets products are vegan.

Are Scentsy products tested on animals?

Although there is no legal definition of or agreed-upon global standard for cruelty-free products, be assured that Scentsy has never tested its final or finished products on animals, nor are we aware of any ingredients in our products that are currently tested on animals or have been tested on animals over the past 10 years — and we are actively working with our suppliers (and their suppliers, where applicable) to ensure the truth of these statements. We will continue to work with all our manufacturing partners and ingredient suppliers to make sure Scentsy products remain cruelty-free — meaning zero tolerance for ingredients that are currently tested on animals.

Is Scentsy safe to use around indoor birds?

As long as Scentsy products are used for their intended purpose, there should be no adverse effect on indoor birds or other pets. For safety purposes, Scentsy recommends that warmers be used in a wellventilated room. If your customer has a small indoor bird, ask them to consider leaving a window or door open when heating wax, or using their warmer for a few hours each day and then turning it off at night. Recommend they consult their veterinarian with any concerns about using Scentsy products around their pets.

We recommend that bars be used within a year to ensure an optimal fragrance experience, but your customers can still enjoy bars after this time frame, especially if they follow correct storage methods.

How should I store my Scentsy UK wax bars?

Keep them in a cool, dark place. Bars should be stored flat, with the label facing up, whenever possible. Rotate older bars to the front to make sure they are used first. Wax shouldn’t be left in direct sunlight for an extended period of time. Bars shouldn’t be stored near a heat source or in the car; they will melt. Storing Scentsy Bars in the freezer should also be avoided, as extremely cold temperatures may diminish fragrance quality.

What can I use to clean wax spilled on the outside of my warmer?

Use a clean paper towel to soak up any liquified wax on the outside of warmers, countertops, walls, and flooring. If the wax has solidified, it can be gently scraped from the surface and discarded. Many have found success by liquefying the wax with a blow dryer, and then using a paper towel or brown paper bag to soak up wax from carpet fibers. If wax dye has discoloured carpet or other fabric, an oxygenbased cleaner or stain-lifting product can be used (following manufacturer’s instructions).